Designed by the expressive Franck Muller, assembled in the French Jura mountains, powered by a  Japanese Miyota. This entry-level mechanical skeleton watch goes on Kickstarter for a bargain price.

I was never a fan of skeleton watches. But the universe conspired and a skeleton watch happened to drop into my hands. Now, I can’t help but feel that all watches in the world should have see-through dials. Laying your eyes on a swinging rotor or the rapidly ticking escapement in the case of the Yonger Bresson Le Singulier, is truly magical. 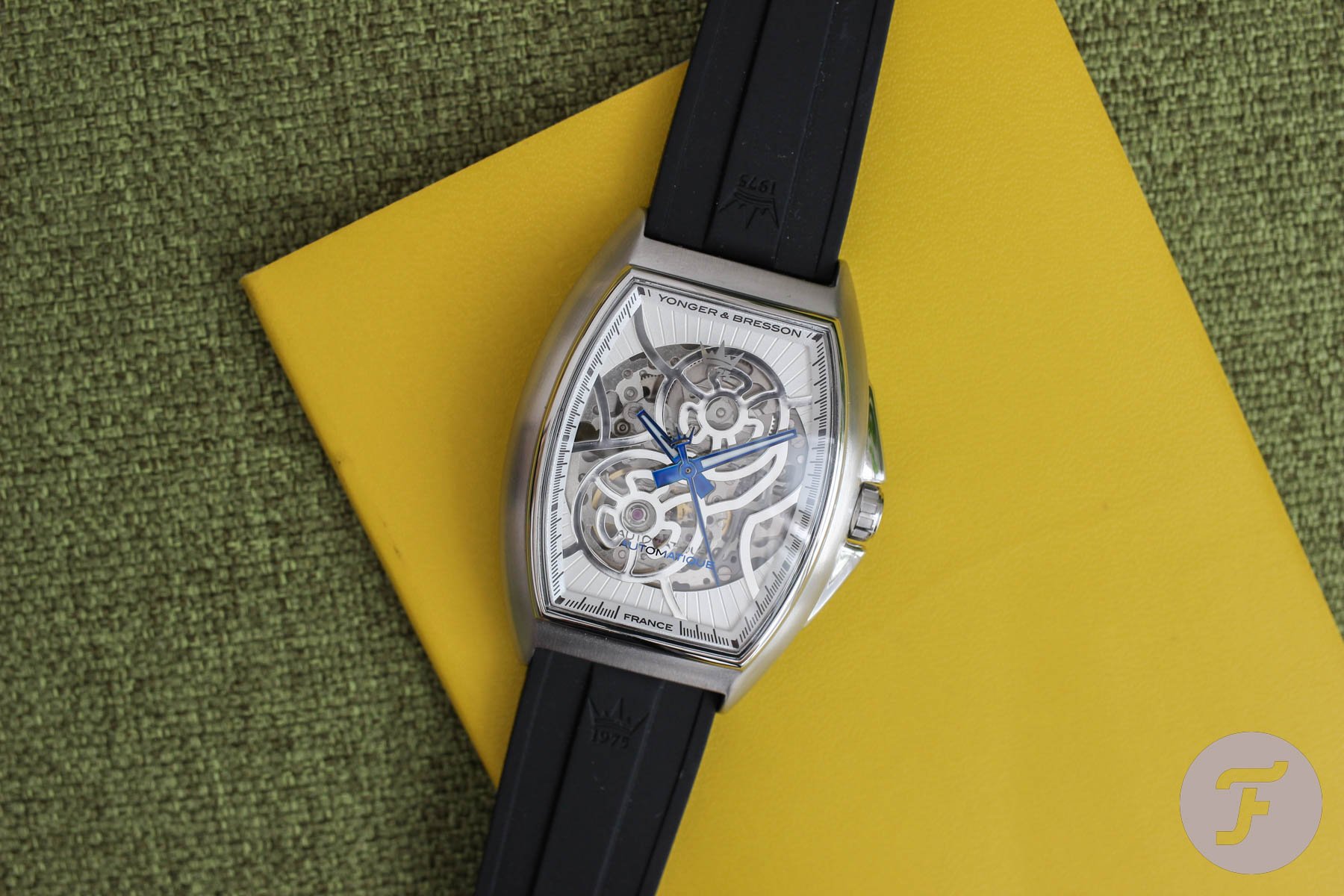 I tipped my hat to the Yonger Bresson Le Singulier as soon as it hit my mailbox, as we do not see the skeleton concept in its price range very often. Besides, a part of my “watch hygiene” to prevent me from becoming too spoiled, dictates that from time to time I also pick up and wear entry-level mechanical watches. Did you just ask who the hell Yonger Bresson is? Well, I’ll tell you. The brand Yonger Bresson was established in 1975 by two French brothers. Neither of them was Yonger, nor Bresson. They borrowed the name from the famous French photographer Henri Cartier-Bresson, who pioneered the genre of street photography and was one of the founding members of Magnum Photos in 1947. Ambre, who also stands behind the French brand Yema, took over the brand in the nineties. And it seems Ambre has big plans for re-launching Yonger Bresson.

Partnering with Franck Muller and his design team was a smart idea. To have such a powerful name in an entry-level mechanical watch can be a gamechanger. The business results of the reborn brand will either confirm or reject this hypothesis in a few months from now. Copying Yema’s example, Yonger Bresson opted for a launch campaign on Kickstarter. The more famous brand from the Ambre group achieved some breathtaking results on the crowdfunding platform. I’ll be munching away on some popcorn whilst watching and waiting to see how Yonger Bresson will do. 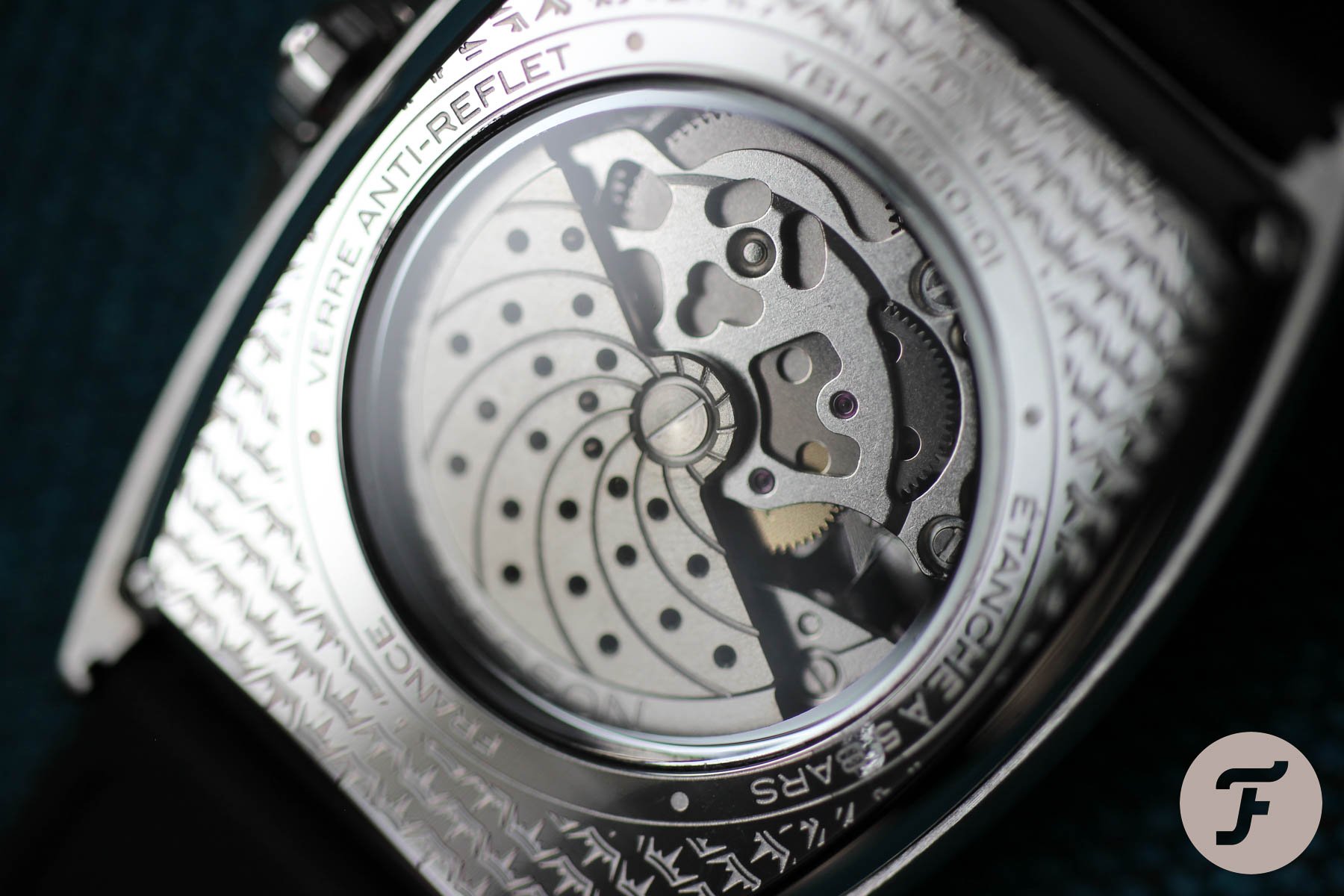 What’s in the game?

Three Le Singulier watches (meaning unique in French) with a Yonger Bresson crown printed on the crystal. The crown logo printed on the crystal gets a bit lost on the black and gold model. It’s best visible on the steel one. The black Le Singulier is the most interesting, almost mysterious, but not as easy to read. The gold is surprisingly pleasant, but again the hands are a bit drowned in a dial. Dial visibility could be a bit better in both. That’s why my choice would be the brushed steel Le Singulier with blued hands. While the black seems too sporty and the gold a bit too dressy, the steel model strikes me as the most versatile option.

The curvy case undoubtedly carries Franck Muller’s DNA. The minute track runs steeply down to the dial but is easy to read. I like how the Yonger Bresson name is integrated into it. For a $250 watch, the designers paid an unexpected amount of attention to the case back. It’s steel and decorated with the crown symbol as a repeating pattern. It holds to the case with four screws. Once you’ve studied the engravings, you are left to enjoy the backside of the movement through the round transparent crystal.

How much of a skeleton is the Yonger Bresson?

It took me some time to ask myself this question. But here we are. And we’re not here to mince words today or try to find the real difference between a skeletonized watch, an open-worked watch, a watch with cutout dials, or whatever else… You have to realize that we are talking about a $250 watch. You can‘t expect a Corum Golden Bridge design. Technically speaking, there is no huge sophistication as the watch movement does not play an integral role in the overall watch construction. It’s rather the dial that “lost” as much mass as possible. The little that is left just creates the shape of an avant-garde “road map” made of steel. The road map holds the hands and forms an asymmetrical hard-to-decode pattern. It seems to have no deeper reference or symbolic meaning and is purely decorative.

Could the movement be slightly more naked? Yes, I suppose. But I think the designers were looking for a way to not unveil it too much. When you consider that the movement is skeletonized, but generic, I would say the level of the revelation is okay. The important thing for me was to be able to see the “living” parts of the movement. With the Yonger Bresson Le Singulier, you can see the pallet fork and the escape wheel. In other words, the essential parts that give impulses to the timekeeping element and periodically advance the gear train to move forward, rotating the hands. A fun fact for super-curious readers: if you hold your watch against the sky and keep the rotor out the way, there are a few spots that are completely see-through. 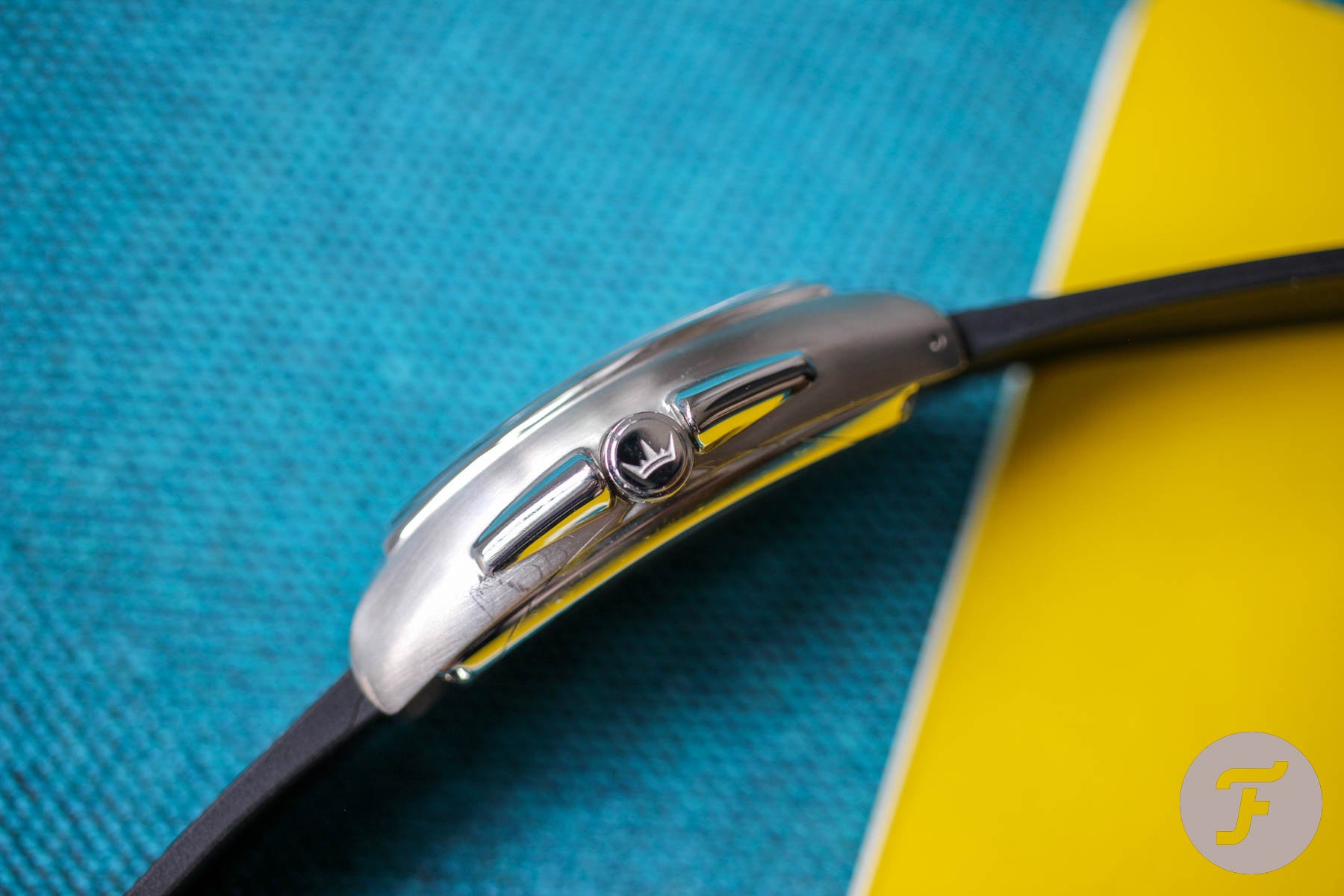 A silicon strap with crown symbols around the lugs has a patented clasp. No reservations to report with the strap, I found it comfortable and of good quality. Using a material like silicon was an unusual choice, but it only underlines the versatile character of the watch. The manufacturer also promises an optional vintage leather strap, but I haven’t had a chance to try it. The crown is protected by an elegant pair of sleek guards and is signed, another detail that counts in this price range. 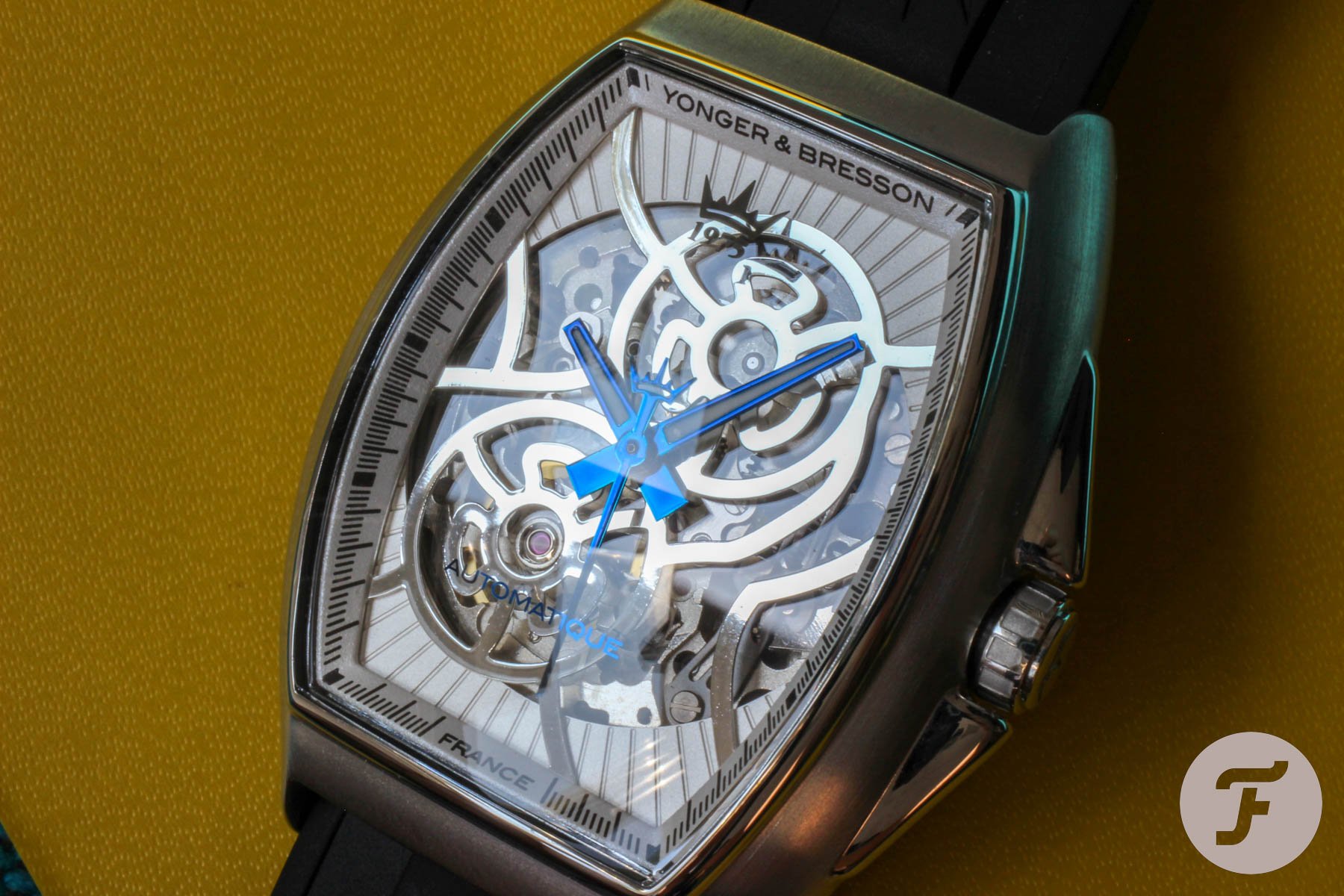 “At the beginning, there were around four concepts until the skeleton was selected. From idea to final design we have worked on it for almost two full years,” explains Gabriele Guidi, the new Head Designer. It once again confirms that releasing a (new) watch even in a lower price range isn’t an easy job to get done. If you want to make it right, that is… Despite the fact that it’s not entirely my cup of tea, I can imagine that it can be more than attractive for someone looking for a mechanical timepiece in an extravagant and a bit artsy style for a modest budget. From what we know, there will be three more collections hitting the website soon. I am really curious to see how the now rebranded Yonger Bresson will continue to pursue its international ambitions.

This article was originally published by Fratellowatches.com. Read the original article here.
SaveSavedRemoved 0